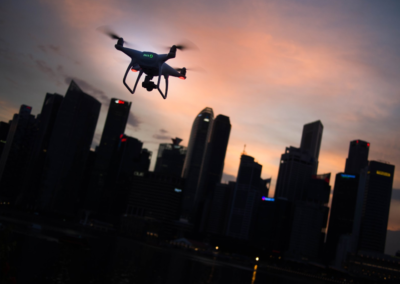 A critical step in the integration of unmanned aircraft into the National Airspace System is scheduled for Dec. 20 as the FAA releases its Notice of Proposed Rulemaking on remote identification requirements for drones. The agency will require that all drones emit some kind of signal giving aircraft and ownership information and that’s considered fundamental to all the other rulemaking that will follow. The agency doesn’t expect to make a decision on remote ID requirements for at least two years after the publication of the NPRM. “There’s probably no schedule that we could ever show that would be fast enough [for implementation of remote ID],” Jay Merkle, director of the FAA’s UAS integration office, is quoted by Avionics International as saying at the Drone Advisory Committee meeting earlier this month.

Remote ID is considered essential by the FAA for beyond visual line of sight (BVLOS) operations and law enforcement wants to be able to identify reckless or unlawful operators. Just how those signals are transmitted and collected is the main technical issue and so far Bluetooth, Wi-Fi and dedicated networks have been proposed. Industry groups are naturally pulling for the most cost-effective solutions and there is still plenty of discussion on what information such “digital license plates” should provide.

The proposed “new” system is not going to be decided for two years, while limited range ADS-B OUT for UAS, which could likely be adapted to include identification data, has already been fully developed by uAvionix and DJI has announced that new products for 2020 will include ADS-B IN. I have long advocated for the simple solution of making simple adjustments to the ADS-B mandate that will go into effect in 2020. The current FAA objective appears to be aimed at satisfying law enforcement’s understandable concerns about identifying wayward UAVs. That premise presupposes that all “offending” UAVs will install and retrofit the yet-to-be-invented new system. However, in my opinion, the current approach by the FCC, NASA and others misses the point. The whole point of identification ignores the greater concern for deconfliction (potential for collisions with other aircraft), but manned aircraft will not be installing any new system warning of nearby UAVs. Any such additional equipment would need to go through the same lengthy TSO process as the already existing ADS-B equipment. For that reason, it appears the the current trajectory is headed for a dead end. Even if all existing and new UAVs were to adopt this “magical” identification and traffic management system, and cops will get their fancy new radar-gun style remote ID toy, the flying elephant in the room hovers overhead: manned aircraft will still have no realistic means of avoiding collisions with UAVs. DJI’s solution could at least alert drone operators of approaching aircraft…. but ONLY IF that aircraft is flying in controlled airspace, which is where ADS-B out is required. Out in the REAL world, the manned pilot is still flying blind, with regard to UAVs in his airspace.   For all the nay-sayers who respond with the question of “flooding” the ADS with thousands of signals from drones, that issue was solved years ago with uAvionix “wake on detect” and low power/limited range signal solution.

Essentially, from my perspective,  I don’t understand why the FAA and NASA are attempting to invent another wheel.