DJI has made what appears to be a strange move.

The DJI  dealers had the better reputation for service (Atlanta Hobby) while the company itself had a failing service rating. .DJI recently basically screwed all their dealers by cancelling US dealerships and going to direct online marketing.

I truly do not know what DJI is thinking at this point. But it isn’t the first time they have used what could be viewed as bad judgement for a market leader. They once had an excellent US marketing representative, Collin Guinn (not to be confused with Colin Quinn, the comedian). This person had a dynamic personality who once was center stage leading the first major annual drone event.

I was there. IT was remarkable that there were hundreds of participants for an industry that was yet to be legalized by the FAA.

After his rude “release” from DJI, Colin Guinn moved to join 3D Robotics, a rare and still surviving US drone manufacturer,   which later failed in the drone product market and moved into drone data systems. Then in 2019 3DR got back in the game and merged with French manufacturer Yuneec to enhance the existing Yuneec flagship product, the H520: 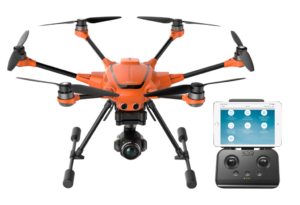 The many advantages of the H520 have proven to be a strong competitor to DJI in the public safety sector, offering better stability and durability under less than favorable weather conditions. In a test against two leading DJI products in a 30 mph wind the H520 (then a Product of French producer Yuneec)   The six-blade Yuneec proved much more stable than the similarly priced DJI four propeller “quadcopter” Inspire, while the other 4 prop DJI Phantom was found some distance way the next day.

I once owned two DJI Phantom drones, an early DJI Phantom 2-Vision ($2300) and its successor ($2,700), along with another, cheaper Chinese product, the ($350) UpAir G10, although due to issues with my distance vision I have sold all my drones.

I have the feeling 3DR will have no problem filing the void created by DJI.