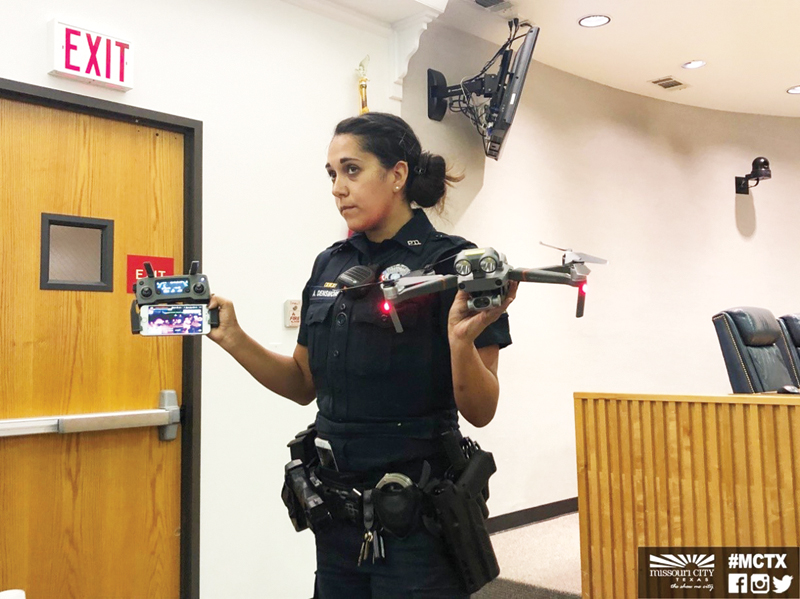 Missouri City Police Department is one of the top agencies in the State when it comes to earning a “Re-Recognized Accreditation Status” and fewer than 40 police organizations in the State have been recognized like the MCPD, Police Chief Mike Berezin told the city council.

Texas Police Chiefs Association has given The Texas Recognized Agency designation to Missouri City three times and the police department has a crime clearance rate of 28% compared to the state’s 17% average, Berezin said.

The Texas Best Practices Recognition Program has become the new Gold Standard for Texas Law Enforcement. The “Recognized” status is awarded for a four year period.

Missouri City was also recently ranked in the top 50 safest cities in Texas; there were more than 8,000 code enforcement inspections made, and the chief implemented the Open Data Initiative, the first to do so in the Houston area.

Berezin explained how Data Driven Approaches to Crime and Traffic Safety (DDACTS) help keep citizens safe. He explained DDACTS and how it integrates location-based crime and traffic data to establish effective and efficient methods for deploying law enforcement and other resources.

It also uses geo-mapping to identify areas that have high incidences of crime and crashes and DDACTS uses traffic enforcement strategies that play a dual role in fighting crime and reducing crashes and traffic.  Drawing on the deterrent of highly visible traffic enforcement and the knowledge that crime often involves the use of motor vehicles, the goal of DDACTS is to reduce the incidence of crime, crashes, and traffic violations across the country. The software relies on prompt collection and analysis of crash and crime data to provide actionable reports that inform tactical and strategic decisions of a law enforcement agency.

Council was able to see the drones first-hand and to learn about the value they bring to policing.The chief told council that his department continued tracking Part I crimes and crashes citywide, but also expanded reports to include both categories in the identified DDACTS zone.

Then he went on to UCR Part 1, violent crimes per 100,000 population. Violent crimes are murder, rape, robbery and aggravated assault.

Property crimes are burglaries, larceny and motor vehicle thefts. From 2017 to 2018 burglaries dropped from 129 to 97 or 32 fewer.

Property crimes in District A start with 22,142 “other” calls to police. All other calls numbered 680 on residential alarms; 471 for traffic violations; 436 for commercial alarms; 392 for minor accidents; 173 on thefts; 141 for major accidents; 100 burglaries of motor vehicle; and 100 for criminal mischief.

The top 5 violations in District A were trash screening, vegetation, junked/abandoned vehicles, weather protection/paint, and dilapidated fencing. District B’s top 5 were the same with the exception of exterior structure-mildew. District C’s problems were the same 3 top ones plus trees and garbage and District D’s were the same as C’s.