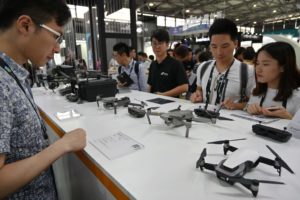 WASHINGTON — DJI, the large Chinese drone maker, is facing mounting security concerns within the Trump administration that its flying machines could send sensitive surveillance data back to China. Now, the company is trying to get on American officials’ good side by building some products in the United States.

The company, which is privately held, said on Monday that it would repurpose a warehouse in Cerritos, Calif., to assemble a new version of a drone that has been popular among federal and local government agencies. The assembly of its flying devices in the United States will represent a small percentage of DJI’s overall global production. But it could help the company meet some necessary federal requirements.

The new production facility and the new data features, the company hopes, will be enough to continue to sell the products in the United States. About 70 percent of all drones in the country are supplied by DJI, according to one estimate. The company makes small drones for hobbyists as well as the higher-end industrial grade drones used to survey remote areas and forest fires, among other uses.

June 24, 2019 – DJI, the world’s leader in civilian drones and aerial imaging technology, today sent a letter to the U.S. Senate Commerce, Science, and Transportation Subcommittee on Security to set the record straight on incorrect claims presented during a hearing last week.

In the letter, DJI responds to hearing witnesses’ incorrect speculation about the company’s data security practices, writing: “the unsubstantiated speculation and inaccurate information presented during [the] Subcommittee hearing will put the entire U.S. drone industry at risk, causing a ripple effect that will stunt economic growth and handcuff public servants who use DJI drones to protect the public and save lives.” DJI adds: “DJI drones do not share flight logs, photos or videos unless the drone pilot deliberately chooses to do so. They do not automatically send flight data to China or anywhere else. They do not automatically transmit photos or videos over the internet. This data stays solely on the drone and on the pilot’s mobile device. DJI cannot share customer data it never receives.”